Posted by Admin Posted on Sabtu, Oktober 04, 2014 with No comments Views 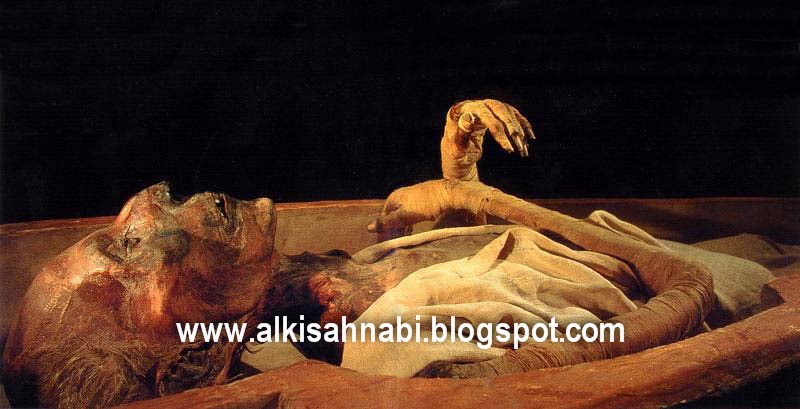 Firaun’s (also known as Pharoah) body was found dead in the Red Sea,this proves that the story of Moses splitting the sea and saving his people really happened. Pharoah’s body is 3500 years old, it’s amazing that it was preserved well in the sea. The fish in the sea could have easily eaten the body, but they didn’t.


Allah Ta’ala once ordered Hazrat Moosa (Alaihis Salaam), “O Moosa! Throw your walking stick to the ground.” The Prophet (Alaihis Salaam) did as he was told and was shocked to see his walking stick turn into a frightful snake. He then turned his back so as not to see it again, but Allah Ta’ala consoled him by saying, “Don’t fear this. Grab the snake and it will return to its original form.” Hazrat Moosa (Alaihis Salaam) again did as he was told, and as promised, the snake became his stick once more. Allah Ta’ala then gave him the order to go to Firaun, to instil the fear of his Lord into him, tell him to forsake infidelity, and to show him this miracle should he request one.” [Surah 20, Verses 19-24]

Hazrat Moosa (Alaihis Salaam) then approached Firaun and said to him, “Firaun! I am a Messenger of Allah and a deliverer of the truth. You have to stop claiming to be Allah and start worshipping the One, True Lord.” Firaun replied, “If you are a Messenger of Allah, show me a sign.” Hazrat Moosa (Alaihis Salaam) then threw his stick to the ground, and within moments, a towering, yellow snake stood on its tail a mile high above the ground, its one jaw placed on the earth while the other on the wall of the palace. When it turned to Firaun, he quickly jumped off his thrown and ran away (along with all of his other servants). The scene produced a stampede so violent that thousands died in the rush alone!

When he finally reached his home, Firaun cried in terror and said, “O Moosa (Alaihis Salaam)! By the One who made you a Messenger, take that snake away!” Hazrat Moosa (Alaihis Salaam) accepted his request and turned his snake back into his walking stick, allowing Firaun to compose himself once more. [Tafseer Khazaainul Irfaan] 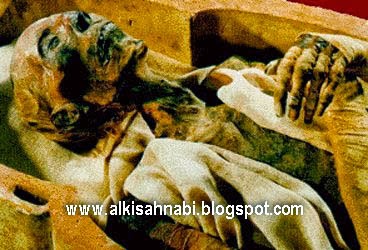 Firaun was troubled by the recent display of Hazrat Moosa’s (Alaihis Salaam) miracle and sought with his officials to find a way to regain prominence in the eyes of his people. His men advised that since Hazrat Moosa (Alaihis Salaam) was displaying “magic” that he had learnt during his exile years, Firaun should gather the magicians of his own kingdom together and challenge the Prophet (Alaihis Salaam) in an open duel.

This suggestion was accepted by the king, and so after amassing thousands of magicians living under his rule, Firaun forwarded the challenge to Hazrat Moosa (Alaihis Salaam), who agreed to it without any hesitation.

On the prescribed day, thousands of magicians presented themselves before Hazrat Moosa (Alaihis Salaam), as the many followers of the king looked on, and threw their sticks and ropes to the ground, showing that they too had the power to change ordinary objects into snakes. But after every speck of earth for miles became covered with serpents, frightening the attendees, Hazrat Moosa (Alaihis Salaam) threw his own staff to the ground and displayed once again the miracle bestowed upon him by Allah Ta’ala.

Within moments, his snake overcame all the others, swallowing them individually (along with a flock of 300 camels) until it finally returned to the Hazrat Moosa (Alaihis Salaam) and changed back into its original form.

Knowing that such a thing was not possible through magic or any human trickery, the magicians cried out, “We believe in the Lord of the worlds,” fell to the floor in prostration, and accepted Islam. [Surah 7, Verses 116-121; Tafseer Khazaainul Irfaan]

Firaun and his followers however remained strong in opposition against Hazrat Moosa (Alaihis Salaam), leading the Prophet to finally turn to Allah Ta’ala saying, “O Allah, Firaun and his men continue to be arrogant and stubborn against you. Punish them as a warning to my nation and to those who will come afterwards.” In response Allah Ta’ala created a massive cloud over the city which covered its people in darkness and unleashed upon them a violent and continuous rainfall. So fierce was this downpour that it caused a neck-high flood and drowned anyone who tried to rest during the course of it. Yet look at the Power of Allah! The houses of Firaun’s men were overcome with water while the houses of the Bani Isra’eel, which were connected to the other houses, remained unharmed.

After seven days the weakened nation of Firaun approached Hazrat Moosa (Alaihis Salaam) and pleaded with him to seek an end to the storm, promising that they would believe in Allah when it was over. The Prophet obliged, and after making Dua once again, both the rain and the cloud finally relented. [Surah 7, Verses 133-135; Tafseer Khazaainul Irfaan]

However, when the rain ceased and the greenery of the Egyptians was flourishing more than they had ever seen, Firaun’s people ignored their previous statement and said, “The rain is now a blessing for us, why should we believe in what Moosa (Alaihis Salaam) is saying?” Infuriated by their arrogance, Hazrat Moosa (Alaihis Salaam) sought punishment from Almighty Allah once again. So after a month of Mercy, Allah Ta’ala dispatched a swarm of locusts to the city which chewed up the farms and doors of the king’s people, a punishment again befalling everyone except the Bani Isra’eel.

After being brought to their knees a second time, the Egyptians again approached Hazrat Moosa (Alaihis Salaam) and pleaded with him to end the swarm, again promising to believe in his teachings. Hazrat Moosa (Alaihis Salaam) obliged, but amazingly, once the locusts were no more, the people of Firaun again continued to worship him. Hazrat Moosa (Alaihis Salaam) then made Dua for a third punishment to befall them, which came in the form of Qummal (Qummal is said to have been a small black insect according to commentators of the Holy Qur’an). These insects ate through the clothes of Firaun’s followers, bit their entire bodies and infested their food and grain. Sleep also became almost impossible, for they had to deal with the many bite marks on their bodies, including the ones on their eyebrows and eyelids.

As a result, Allah Ta’ala turned the entire water supply of Egypt into blood. Whether it came from wells, streams, fountains or the River Nile, if anyone took any water for himself, he’d find that it wasn’t water anymore. However this again only affected the followers of Firaun and not the Bani Isra’eel. When the Egyptians tried extracting water from the Bani Isra’eel’s vessels, then too it would turn to blood. Thirst became so severe for the Egyptians that they even tried (unsuccessfully) to suck the moisture out of the trees. When they could take no more of it, they approached Hazrat Moosa (Alaihis Salaam) a fifth time and requested him to bring an end to the punishment, promising to believe in Allah Ta’ala. Hazrat Moosa (Alaihis Salaam) made Dua one final time to grant the followers of Firaun a chance to redeem themselves. However as soon as the difficulty was over, they returned to disbelieving in him again! [Surah 7, Verses 133-135; Tafseer Khazaainul Irfaan]

Now Hazrat Moosa (Alaihis Salaam) became despondent over the ways of Firaun and finally turned to Allah Ta’ala saying, “O Rabb! Destroy their wealth and stiffen their hearts so that they will not accept You until they witness a severe punishment.” In response, Allah Ta’ala ordered him to leave the city at night with the entire Bani Isra’eel. At nightfall, the entire Bani Isra’eel proceeded with Hazrat Moosa (Alaihis Salaam) out of the kingdom of Firaun in a procession that numbered 600 000 individuals.

News of their departure soon reached Firaun and before dawn he too amassed an army roughly twice the size of the Bani Isra’eel and departed to apprehend his foster-son and followers. The army reached them by morning and when the Bani Isra’eel saw the forces behind them, coupled with a river blocking their path in front, they turned to Hazrat Moosa (Alaihis Salaam) in desperation, and in reply Hazrat Moosa (Alaihis Salaam) struck the river with his staff and caused it to burst open, forming twelve paths before them that would allow the Bani Isra’eel to proceed to the other side.

The groups quickly crossed the river as the water stood motionless beside them. When Firaun’s army arrived, they too attempted to cross the river, only to find the water-walls breaking away and the army together with Firaun were immediately overcome and drowned by the Power of Almighty Allah. [Surah 10, Verse 90; Tafseer Roohul Bayaan]

Hazrat Jibra’eel (Alaihis Salaam) once approached Firaun during his reign, seeking an answer to a written question he’d brought with him, which read as follows, “What would you do to a servant who lives off the sustenance of his king yet shows ingratitude to him, refutes his rights, and even goes as far as claiming to be the king himself?” Firaun wrote in reply, “For that ungrateful servant, I would have him drowned.”

May Allah Ta’ala save us from arrogance and pride and grant us the Taufeeq to always affirm that we are nothing and He is everything, Ameen.